Having been introduced to Irish culture at a very young age, Corey quickly grew to love the Irish music and dance which surrounded him. Advancing rapidly through the ranks of the competitive Irish dancing scene, Corey soon found himself on the National, then World stage of competition. After competing for 14 years, and discovering that he preferred his own artistic and rhythmic approach to the strict form required by the judges, Corey transitioned from competitions to stage productions and performance. He now dances with several notable bands including the esteemed Irish group Danú.

Corey’s musical talents began developing when he was 16, and started teaching himself tunes on the Irish style button accordion which he bought himself as a birthday present. Progressing quickly, he was soon studying under 7 time All Ireland Champion John Whelan, and began honing his technique under John's tutelage. Corey found his true calling in traditional Irish music, and rapidly branched into other instruments including cittern, bodhran, and voice. 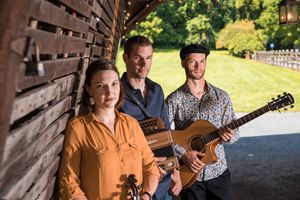 Poor Man's Gambit was formed in 2015 and hails from Philadelphia, Pennsylvania, USA. This trio has released 3 albums, completed two international tours, and has been noted as an increasingly popular Irish-American group.

Featuring Corey Purcell (button accordion, cittern, bodhran, vocals, and dance), Deirdre Lockman (fiddle, vocals), and Federico Betti (guitar, fiddle), PMG brings together three diverse musical backgrounds which complement the other’s musical styles both on stage and in the studio. With two multi-instrumtalists in the line-up, PMG has been noted for their ability to change instrumentation many times over the space of a performance, and offer several levels of musical depth to listening ears. The addition of Corey’s flashy footwork on the occasional reel adds an extra punch of energy to their shows.

The trio’s latest album ‘Land of Sunshine’ showcases a carefully selected offering of spirited tunes balanced with an equal number of expressively performed songs. Most of the repertoire is rooted in Irish traditions, but some pulls from other provincial influences including England, Brittany, and Scotland, in addition to several original compositions also included in the collection.

Learn more about Poor Man's Gambit, and any upcoming shows at poormansgambit.com 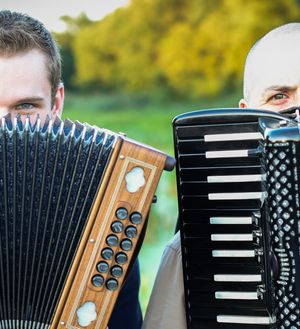 This unique configuration of two accordions came into existence when Corey and Rob Curto met while working at Liberty Bellows, the one-stop accordion shop in Philadelphia. Coming from completely different musical backgrounds, they began experimenting with repertoire from diverse genres and discovered that the combination of their distinct styles was worth pursuing. The Free Reeds repertoire features a lot of original compositions by both Corey and Rob, in addition to traditional music of many countries including Ireland, France, and Sweden.

Ever wonder what that thumping is that you hear at Corey's shows?

Wonder no more, it's a ToeKicker stomp box by KOPF Percussion!

Corey is a KOPF sponsored artist, and uses a ToeKicker at most shows on his own and with Poor Man's Gambit.

You can pick one up yourself here: https://www.kopfpercussion.com/acoustic-stompbox/